Why I’m a Feminist

Why I’m a Feminist

This is Women’s History Month, and I feel like, finally, it’s the right time to tell the story about this artwork. 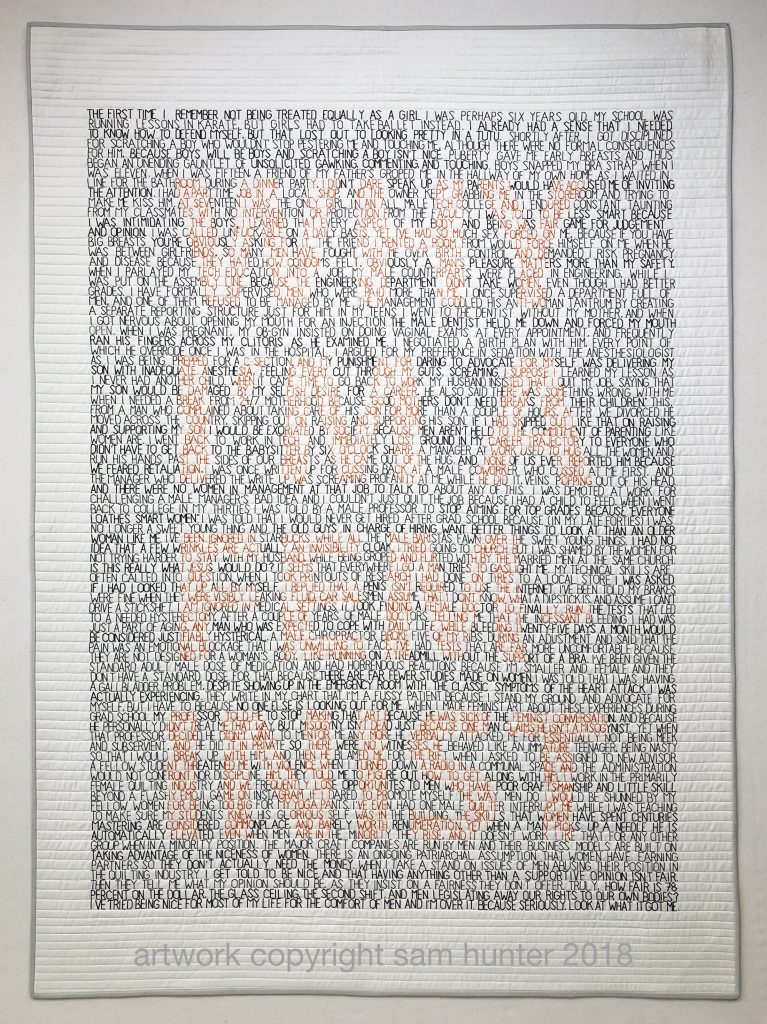 Why I’m A Feminist (click to read the larger image)

The idea to make this piece came to me a few years ago, as I took in a collection of works, made by a man, that included social commentary about the plight of women. I was frustrated that a man felt he could make art about my experience without ever walking a mile in my high heels, and I was frustrated that an organization would hang that work instead of looking for the work of women making similar statements with their art.

I’m tired of how much authority and space we give to men who write about the experiences of women; there’s an arrogance in usurping the stories you have not personally lived, and it’s time for women to be the documentarians of their own experiences, not men. Note to the fellas: no matter how woke you think you are about feminism, you will never know the depth and differences of women’s lives, so sit down and hush.

It got me thinking about what kind of art I would make about my own experiences as a woman, and this idea for a quilted fiber art piece began to take hold. It was a slow, burning hold because I didn’t want to live in the space of remembering these incidents, of feeling them again, of documenting them, of being asked to explain them. I also knew there would be the inevitable trolls* once I shared the work publicly.

But art always demands its right to exist. Thus, I spent two years both steeped in this project whilst trying to run away from it. I lost myself in the technicality of testing the construction for a while, and then, finally, it was time to stitch the first words.

I am a fiber artist, thus cloth and thread are my tools. Women have used embroidery for centuries to both learn our letters and teach our stories, so I felt it was the right medium for this work. I’m really glad #metoo exists, but it’s easy to see that hashtag and avoid the pain and horror that lives underneath it unless you read the actual story, in all its messy detail.

This story is IN the details. It’s not an easy read, and stitching through it was both harrowing and cathartic; it’s definitely this woman’s history. It’s the tip of my iceberg, and I could make a hundred more pieces about this and we still would not yet reach the water level. The violations are so common and commonplace that I know I have normalized many of them, and forgotten thousands more.

This is a personal story, one of the death by a thousand cuts that patriarchal society has brought to bear on me as a girl, a young lady, and a woman.

It’s the story of so many things that happened to me: things that showed me where my rights aren’t equal; where the world has been constructed for the privilege of men; where my body is not considered my own; where my needs are deemed irrelevant, and where my concerns are written off as hysteria.

It’s the story of how I’ve been penalized for being a woman, a wife, and a mom. The story of where the societal expectations of being nice anyway have cornered me and silenced me.

It’s the story of knowing that something felt wrong, but having no one teach me or show me it wasn’t okay, so I didn’t speak up.

And yet, every woman I have shown this work to has said she could tell a similar story.

And many of them have been shockingly matter-of-fact about it, too, which means we’ve been dealing with this for far too long.

Think about that. This is systemic at an undeniably insidious level.

It has been intense, powerful, humbling, and devastating to be with other women as they read this quilt. So many women telling me their story. From women in their 20s to women in their 80s, they have turned to me in tears, us holding each other tight in the sisterhood of shared trauma.

Women reading every word. Women reading it out loud to each other. Women telling me this made them feel like maybe they could be braver now, and me telling them I fervently hope so.

Women telling me to keep making this art because we need it.

We do need feminist art. Art can speak volumes where words can fail. Art is a language that we can use powerfully to speak up and speak out.

While this work is my story, I think the real story is that so many of us can tell a similar one.

Made in 2018. Digitally designed and hand embroidered by me, Sam Hunter. Quilted by my dear friend Nancy Stovall. Honored with 3rd Place in the Handwork category at QuiltCon 2019.

P.S. I will not transcribe this work in a public place so that none of it can be used out of context against me or other women. If you want to know what it says, please read it.

* I have been threatened with bodily harm for my feminist writing, and I have been threatened with a lawsuit for allegedly using this artwork to name someone as a rapist. If you read every word, you will see that no one is named, nor do the words “rape” or “rapist” appear on the work. These threats were bullying power plays, attempts to silence me by using fear tactics. They were all done by men.

Another story we women know so very well.

Also: Go here for a Quilt Alliance interview of me talking about this artwork